Thank you for visiting our blog, BitterSweet, Linked Through Slavery. We welcome you to read our stories, leave comments and become involved. Please click on the “Follow BitterSweet” button to the right to ensure that you do not miss any news posts.

… (T)he great force of history comes from the fact that we carry it within us, are unconsciously controlled by it in many ways, and history is literally present in all that we do.  It could scarcely be otherwise, since it is to history that we owe our frames of reference, our identities, and our aspirations.  And it is with great pain and terror that one begins to realize this …

As social beings we are linked or related to each other in a million ways. As an expression of this, we often spend time with new people we meet trying to figure out positive linkages or connections in the recent past–people we both know, places we’ve both been, experiences we’ve shared.

END_OF_DOCUMENT_TOKEN_TO_BE_REPLACED 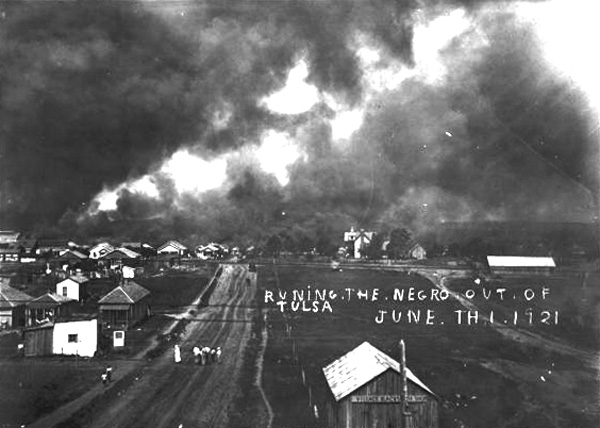 Tulsa, specifically the black district of Greenwood, one of the most affluent African-American communities in the United States, was also known as “Black Wall Street.” Ottawa W. Gurley was a wealthy African-American landowner from Arkansas. He traveled across the United States to participate in the Oklahoma Land Run of 1889. In 1906 Mr. Gurley purchased 40 acres of land in Tulsa which was “only to be sold to colored.“ With a population of about 10,000 at the time, most businesses were in the small geographical area of Greenwood, Archer, and Pine. There were at least 15 black churches, dozens of Black-owned businesses, movie theaters, skating rinks, hotels, restaurants, grocery stores, dry cleaners, entertainment halls, construction companies, and recreation centers. At least two Black families owned their own airplanes. It was truly a safe and sustaining black community.

On May 31, 1921, Tulsa‘s Black community was the target of a violent attack on by white residents of Tulsa. The attack included deputized citizens, and planes dispatched by law-enforcement to drop bombs on this community. Black Wall Street was destroyed, rendering many of its residents homeless and without their businesses. For many years, all historical reporting, and even talk about the horrific tragedy, was forbidden or hushed. Black people were encouraged to be silent and not retaliate for fear of another government backlash.

My mother’s stepbrothers, James and Abe Yates, lost residences in that massacre —a financial loss that was never recovered.

END_OF_DOCUMENT_TOKEN_TO_BE_REPLACED

A poem by Michael Nelder

Michael Nelder read this poem at the All Saints Church in Pasadena, CA on Sunday, May 23, 2021, as part of a Poetry Slam honoring the one year anniversary of the murder of George Floyd.

In the church I grew up in
when we’d hear of an injustice so evil you couldn’t explain it away …
the kind that would make your eyes burn and your lungs cave in
and your inner voice begs your mind to turn off the news
because seeing one more black body, chalk outlined
on the pavement, might shatter your pop culture fantasy of life,
the same one that won’t allow you to look a homeless person in the eye,
or admit mass incarceration is slavery in disguise, or see that in this country
you only get as much justice as you can pay for…

The old, black church mothers would say to us,
“baby, you’ll understand it by and by”
my Grandad says, “son there’s some lessons
you only learn through gray hair”
The book of Ecclesiastes says,
“with much wisdom comes much sorrow…

This week was the first time I wished for ignorance,
for the bliss of a care-free, mediocre white man,
working at Starbucks…wearing t-shirt and jeans
do I have to be black hoodie all the time,
center of conversation on race among performers,
commentary for Daunte Wright, George Floyd, Mikayla Bryant
I am still sick, vomiting after taking the red pill of American History

Lately, I been wanting to ask God, “if we’re all supposedly made in
your image, then why do people hate it so much they want to kill it?”

Michael Nelder (@michaelnelder) is the son of a preacher, author, and spoken-word artist.  At the United Way of Greater Los Angeles he served as Impact Speaker using the power of storytelling to bring awareness, inspire action, and raise capital to combat poverty. A love for poetry and prose inspired his TEDx talk on the power of poetry in facilitating spaces for self-discovery and identity development.  He’s been invited to speak, perform, and teach at universities, businesses, churches, and prisons. He is currently the Director of Hope for LA, a local outreach vehicle that focuses on impacting homelessness, loving foster youth, and lifting up families in need. He resides in the Highland Park area of Los Angeles, where he enjoys raising his new pup, Luna.

My father Charles Joseph Bocage Sr. died when I was almost five years old. We moved from New Orleans to Los Angeles within six months of his death. My mother told me many stories about my father’s family. As I got older, I tried to find out if the stories were true. My genealogical search revealed a lot about my family.

END_OF_DOCUMENT_TOKEN_TO_BE_REPLACED

“You owe me what was always mine” is the title of Briayna Cuffie’s latest blog post on reparations4slavery.com. She is speaking to enslavers whose family records, letters, journals, photos, plantation accounts, etc. contain valuable information about the men, women, and children they enslaved.

END_OF_DOCUMENT_TOKEN_TO_BE_REPLACED

In December 2020, Eric Kolenich of the Richmond Times-Dispatch interviewed several descendants of President John Tyler. He was prompted to write about them and their ancestor when John Tyler Community College began to consider changing its name, and his conversations with members of the Tyler family highlight the issue of how descendants of Confederate enslavers choose to regard their ancestor.

What are the salient facts? Tyler stepped into the position of tenth president of the United States for a single term, but later betrayed his country when he was elected to the Confederate Congress in 1862. When he died shortly thereafter, he was buried with a Confederate flag draped across his coffin. Although Tyler led a country founded on the principle of human equality, he was a plantation owner whose wealth was gained from the exploitation of an enslaved workforce. His great-great-granddaughter’s recent research has discovered 46 enslaved people listed in the 1850 census. During his presidential career, Tyler stood up for his own principles and values, and vetoed much legislation. As a result he was thrown out of his political party, was the first president to have a veto overridden, and was the first president to go through an impeachment vote.

END_OF_DOCUMENT_TOKEN_TO_BE_REPLACED

Maria Montgomery found me on Ancestry.com in 2016. Our family trees overlap because my ancestors enslaved hers. We are “linked descendants”—cousins regardless of whether we share DNA. She asked if I had any probate records that might list people my family enslaved on Gwynn’s Island in Mathews County, Virginia, a five-square-mile triangle of land in the lower Chesapeake Bay.

END_OF_DOCUMENT_TOKEN_TO_BE_REPLACED

Sharon Leslie Morgan moved to Noxubee County, Mississippi to research her ancestors’ history. Morgan’s great-great-grandmother, Betty Warfe Gavin, was enslaved there, and gave birth to 17 children. The father of all of them was Robert Louis Gavin, a white man and the nephew of her enslaver.

“My ancestors came from here and fled,” says Morgan. “For me to come back and reclaim memories, experiences, relationships, I think that is going to help with healing the historical harm of slavery.”

END_OF_DOCUMENT_TOKEN_TO_BE_REPLACED

We are pleased to announce the re-launch of BitterSweet: Linked Through Slavery, a blog hosted by the Linked Descendants Working Group and Coming to the Table (CTTT.) Linked descendants have a joint history in slavery–a pairing of a descendant of an enslaved person with a descendant of his or her enslaver, who are researching their shared history and hoping to find people they are linked to through slavery. Some linked descendants have found each other and are in communication, some are still searching.

END_OF_DOCUMENT_TOKEN_TO_BE_REPLACED

I’ve always been fascinated by migration stories. Hearing the details about why a person left the place of their birth to settle somewhere new always satisfied my love of storytelling and origin stories. Perhaps I was pulled into these tales because I was unknowingly trying to fill a void in my own life. Growing up I did not have many stories of my own that had passed down for generations in my family. But once I was able to unlock that door, and discovered the migration stories of my own lineage, I was introduced to a world I had never imagined. The triumphs and brutality, all living together, laid before me. My journey exploring my ancestry has taken me to the archives of libraries and old courthouses throughout the country and as far as the food markets, private beaches and slave prisons in West Africa.

END_OF_DOCUMENT_TOKEN_TO_BE_REPLACED

When I was a child, Uncle George’s stories and the serious inflection in his voice always commanded my attention. He frequently told me about my maternal great-grandmother, Violet Craig Turner, who had been enslaved until 1865 by W. P. Wallingford from Platte County, Missouri. Uncle George was my mother’s brother. He always emphasized the middle initial “P” and Platte County in his stories, and that Wallingford fathered eight of Violet’s children, including my grandfather.

My family’s slave history was an injustice, and the person responsible was never held accountable for it. In my late fifties, with the help of a genealogist, I started to look for the Wallingford family.